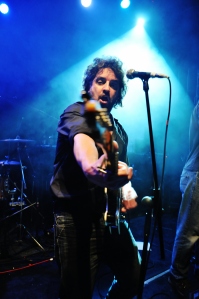 Ian and Johnny will return to their home town’s biggest and most glorious venue on Saturday 2 June for the most important Amsterdam show of the year. The gig has been specially booked to celebrate ‘The Very Best Of Ian Prowse’ CD and is the first time in 18 years Ian has played at the Ellesmere Port Civic Hall which is the crown jewel in the town’s civic area.

Ian is really looking forward to seeing a lot of familiar faces and putting on a truly great show for the town we’re he did his first ever gig at the local Youth Centre back in 1982. ‘I think I know every single person in the ‘Port’, that’s about 80,000 people! We’re gonna have a hell of a party afterwards as well, a real celebration, don’t miss this one’.

The night will be made extra special as the 8 piece Amsterdam musical circus will also be joined by the genuinely legendary Brian Saxophone Jones on a tune or two.

You can buy cheap tickets NOW for this must see show at:  http://www.skiddle.com/whats-on/Chester/Ellesmere-Port-Civic-Hall/The-Very-Best-Of-Ian-Prowse/11617554/

Tickets can also be bought in person from the Red Lion pub in Little Sutton and The Civic Hall itself. Also tickets can be reserved by calling Simon or Steve on  07717 448707.

Support on the night at the big event comes from London based ‘Elsie’ (Laura Critchely) who also originally hails from Little Sutton. Laura has been releasing great records for a few years and is also in Tom Jones’s touring band. First on will be local E.Port lads ‘Acrylic Street’ who won a Battle of The Bands competition to earn the right to play.

THERE ARE NO AGE RESTRICTIONS AT THIS SHOW AND ALL GENERATIONS ARE WELCOME.