Music. Music. Music. Once infected by Paul Weller’s flashing Rickenbacker blade aged 14 I was gone, a hopeless case. Leave school and get a job Mum and Dad? Don’t even ask me, I’m going to blag you with every job dodging method I can think of. Further education? a blag, Enterprise Allowance Scheme? a blag, Busking? a semi-blag.

There were a few profound problems though. I couldn’t play, no one I had ever met could play, no one in the family could play, I had no musicality at all within me (or so I thought) and there was literally nowhere that could help you. This was a council estate in Ellesmere Port no one ever, EVER, used the words ‘artist’ or ‘songwriter’ about themselves. We vaguely knew via the mate of a brothers aunties friend of a few guitar players but they were all heavy rockers, the enemy.

And is seemed like music lessons at school were actually designed to put you off music, ours comprised of Mrs. Jobber throwing the board duster at you (a heavy wooden projectile in those days) and playing Christian musical ‘Godspell’ on the crap record player.

We did have our educators though. Punk in 77, New Wave in 78, Mod/2 Tone in 79, New Romantic by 1980, then the alternative 80’s, not the Howard Jones one. Bang, bang, bang. Amazed and in awe of the (mainly) young people creating this annual change of style, music and energy, who wouldn’t love to have their cement wet at such a time.  Springsteen’s assertion that ‘We learnt more from a 3 minute record baby than we ever learned in school’ wasn’t that far from the truth for me.

The first album I ever owned was This Is The Modern World by The Jam, as these lyrics show it’s about as far away from Showaddywaddy as you could imagine. I wasn’t sussed or old enough to know that Paul was inspired by The Clash but I vividly recall feeling like I’d been struck by lightening when I first heard this verse. By the time they did Mr. Clean I was fit to burst. I still am.

Being a late starter I didn’t actually pick up the guitar in earnest until I was 16. But that didn’t matter and as we left Sutton Comprehensive myself and my mates had a band, all from the same school and the same year. Only one of us could play properly and we were still 2 years away from performing our first ever gig. But we practised and practised and practised. And music was the only thing we talked about

At this stage I just wanted to be in a band, songwriting seemed way beyond me as was singing. Nicky Corran was on drums and David Condra on bass. Dave could play, really play, he dragged us up with him. Tuned things, did harmonies.

Our first gig was on 24 March 1982 at the Ellesmere Port Youth Centre. We started off with Funeral Pyre by The Jam and played songs by The Cure, Afraid of Mice, The Clash and The Comsat Angels. It was packed out and the thrill was indescribable.

The highlight of these very early days was playing at the Masonic on Berry Street here in Liverpool, an absolute Mecca for up and coming bands. Afraid of Mice had played there for Gods sake! A huge circle is made by the inclusion of ‘Johnny & Marie’ on Companeros, written by Phil Jones, A.O.M. frontman.

After this Nick moved to keyboards and Roy Coleman came in on drums, we called ourselves ‘When In Rome’. I remember when we got our first Jupiter 6 Syth, my god it sounded out of this world. This was the 1980’s after all.

We knew from the very start that the only thing that really counted in this game was writing your own songs, so we began that odd and tortuous journey into creating something brand new out of thin air. It was a group effort and we all came up with ideas and bits of music, Nick especially was pretty good at it.

We made our first ever demo (included on the CD) in about 1983 in a crazy fellas bedroom called Tony Restieaux. My god he liked to talk, about himself mostly, but it was all we had. ‘Wake Up Everybody’, ‘Some Fly away’ & ‘When In Venice’, I remember it like it was yesterday.

We got steadily better and all four of us found ourselves on the dole and pretty much loving it. We rehearsed and wrote songs five days a week. The lads would show up to our house in Little Sutton at 12 o’clock and we’d set all the stuff up, damping down the drums with pillows and towels as much as we could. At 4.20 pm, ten minutes before me arrl fella came home from the factory, we’d dismantle it all and the lads would be gone. Leaving a serene and quiet house for me Mum & Dad when only 15 minutes before there’d been loud rock and roll music.

Brenda the next door neighbour, god rest her soul, never once complained or told Anne & Tet what was going on. We did this for about 4 years. 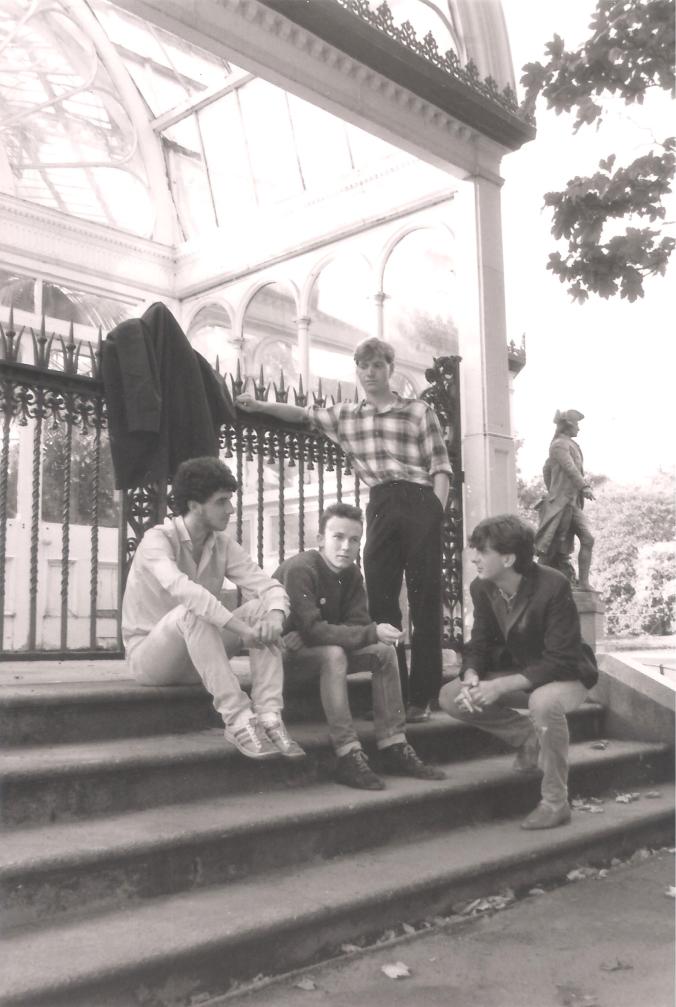 We were a curious mixture of that 80s white soul thing, straight forward guitar pop and Stranglers synth sounds (we all loved ‘The Raven’ album). It was all topped off with the funny low singing voice I had. I didn’t grab the lead vocal spot for myself, it just kind of fell on me to do it. A five year busking stint outside Browns department store in Chester (from 1986 until the day Pele got signed) gave me a real voice, a loud one too.

Like every other young band we’d send our little tapes off to the multitude of major record labels we had back then. Every now and again a rejection letter would arrive.

The days would seem long, waiting for a big break was already 5 years old, that’s a long time when you’re young. We’d played lots of gigs and did tonnes of demo tapes all to no avail.

A new approach was required so we decided to take the bull by the horns. We needed to make a high quality demo tape in a real studio, one that would cost us £1000. So we all hitched it to London and did agency work in hotels and offices. I worked for 10 days as a kitchen porter near Blackfriars bridge. I told myself it was like George Orwell in ‘Down and Out in Paris & London.

We slept on mates floors and when we hit the £1000 mark between us we hitched back home.

To denote a fresh start we changed our name to ‘Joseph Groom Towers’ in honour of an infamous block of run down flats and an Ellesmere Port landmark. We probably thought we were being funny. Also we’d heard of a Manchester band who’d played locally and stolen our name.

Recording our two best songs at Studio 1 in Saughall with a guy called Ronnie Stone this time we didn’t send away our tapes, we took them and banged on doors in that London. Waiting around in every major labels reception for hours on end until we were seen.

This one journey, this one act of desperation changed everything, 8000 Miles was loved in ever office we got in. That mad music industry phenomenon known as a ‘buzz’ was finally happening to us. EMI, Virgin, Magnet, London all headed north to watch us play.

Mark Jones at Magnet was our biggest supporter and they put an actual record deal on the table. A real one. With advances and everything.

We went down there to sign the deal only to be told there would be a delay. Lord Levy (for it was him) was selling the label to Warner Brothers but they were sure WEA would still want us. They didn’t. They just wanted Chris Rea.

Gutted we returned home, Mark Jones was going to manage us though and we still felt confident.

Jonesy then got us on the premier music show on the tele ‘The Chart Show’ as ones to watch. We couldn’t believe it, national TV!

This was our high point over the 6/7 years we’d been struggling to get anywhere. Appearing to literally millions of people on the tele. Except it turned out to be another false start when sadly that other music biz phenomenon of labels ‘going cold’ kicked in. Sends shudders down my spine even now. The band on everyone’s lips one second, then cast out like a leper the next.

With hindsight we weren’t quite good enough, some fine songs but the band itself didn’t really deliver live or have a distinct enough musical personality. We probably suffered from being a democracy as well.

When In Rome/Joseph Groom Towers ended one sunny May afternoon in 1988 in our back garden when they all visited me en-mass whilst I was recovering from septic tonsillitis.

Tired of getting nowhere they were all packing it in, I didn’t argue.

I remember they asked me what I was going to do. ‘I’m going to form a brand new band tomorrow’.

Within a month they all did a gig together without me so effectively I was sacked. Within 2 years my new band Pele had signed to Polydor/M&G records.

As it happens there were two albums at that time which were to provide me with my own musical ‘Road to Damascus’ style revelation. ‘Tunnel Of Love’ Bruce Springsteen’s break up album and ‘Fisherman’s Blues’ by The Waterboys opened up my musical world and once the celtic soul had entered me I had the final ingredient and exactly what I’d been missing. Those pesky minor 7th chords were all thrown in the bin.

This CD of our demos is chronological so you can hear us getting better as we learn our trade, some songs are recorded in house studios, some on a Tascam 4 track, some in proper studios. The sound quality goes from poor to not bad at all. I’m amazed these songs even survived at all given the terrible Hitachi cassette tapes we used to use.
Some of it makes me wince, some is surprisingly good, all of it is the record of what a young artist did at the very start of his weird and wonderful journey into a life of nothing but Rock, Roll and the celtic Soul.

2 thoughts on “Ahead of the CD release Ian remembers When in Rome, his first band.”